My family kind of thinks I’m a hippy.

They aren’t far off really. I wear very little makeup and have rainbow colored hair. I love maxi skirts and mismatched patterns. I’m a supplement junkie, only use toxin-free products (including makeup) and eat as cleanly as my taste buds will allow. Basically, I’m more like chewy granola than crunchy.

And we’re always trying different correction techniques with our boys. I mean, we were never co-sleepers, and we used the cry-it-out method of sleep training with both boys (someone is going to have something say about that, I’m sure…. But wait… there’s more). And swats were on the roster of options for a season. But when our oldest son was a toddler and I was long term sick-as-a-dog pregnant with his little brother, he took advantage. And, in my state, none of the traditional correction methods we’re working.

I have always been a work-from-home mom, so I was trying to manage a difficult pregnancy, a toddler and deadlines. DS was defiant, ignored me, and adapted to most correction approaches to where, after the first 1-3 times, our chosen consequence no longer worked (he’s always been like some alien that adapts to the modular frequency of the gun you try to use on it, so the tech has to constantly be changing and trying to stay ahead of the creature).

He wouldn’t make eye contact, always talked over you and, at 2.5 years old, he refused to abide by any rules that didn’t make sense to him. More heartbreaking was his refusal to show us or receive affection. He didn’t want hugs, didn’t want to hold our hand or sit on our lap.

These are typical behaviors for a highly gifted child at toddler age, but every single day was a struggle that ended in tears and emotional exhaustion.

In utter desperation, I approached an elder at our church who is a retired family psychologist. He suggested something outside the box from conventional methods and I was so desperate for a change in his behavior that Josh and I agreed that, while it was different, we would have to at least try. We had nothing to lose but everything to gain.

It’s called Holding Therapy or Attachment Therapy. It’s often used in treating autistic children. It made such a tremendous difference for us that, even seven years later, I want to share it to help others who have also exhausted all acceptable options for behavior correction.

I was five months pregnant the first time I attempted this strategy with our oldest son. He was being extremely defiant, so without a word I sat him down in front of me in the floor with his back to me. I secured his arms and legs with my own, like a full body hug, and waited. He screamed and resisted like I’ve never seen before or since. The resistance was not because of pain but because he wanted to be in control and I had taken that away. But, at 2.5 years old, he did not need to be in charge.

With this strategy, the process lasts until the child relents and releases the tension. You’re not supposed to make eye contact or verbally respond — something I was not able to completely abide by that first time. I did a lot of praying during those moments. And eventually, he relaxed and I released.

And something amazing happened… something I was never expecting…. he turned around and asked me to just hold him, hug him and love on him. He snuggled into my chest and said “Love you, Momma.” My heart melted.

That evening, when my husband came home, he was telling me about his day. Our son approached to interrupt and steal his dad’s attention — something he did daily. As always, we told him to sit down and wait for his turn to talk to Dad. And he did! He sat right down next to us, stopped talking and patiently waited. My husband was in shock! “What did you do?” he asked in amazement. 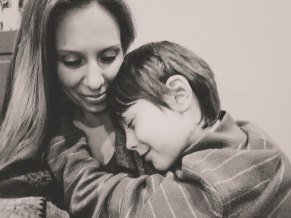 The shift was instantaneous. The changes in our son’s behavior became permanent and within a few months the holding technique was no longer needed. Seven years later and his primary love language is physical touch — he’s one of the most affectionate ten year olds I know. He makes eye contact. He’s polite and compassionate. We firmly believe a stronghold was broken that day.

Around the same time I had a friend with a child slightly older who was physically harming her, screaming that he hated her, ignoring all instruction. She had tried everything too, so I recommended this approach. Within weeks, he too was a different child, finally affectionate, loving and respectful toward his mom.

And now, seven years later, we’ve been using the technique on our youngest son. He was recently diagnosed with Sensory Processing Disorder and has frequently been having meltdowns to the point of self harm, which cannot go on. No efforts to calm him have worked until we started using this technique, which helps him to recognize his negative responses to over-stimulation and learn to better control them.

This is a strategy that we find both effective and loving. It teaches self control and coping mechanisms that emphasize our love for them in a safe way, both for us and for themselves. If posting about this helps even one family, then it’s served its purpose well.

I have a passion for helping others find abundance physically, emotionally, mentally and spiritually. A life lived full well is a life you #LiveAbundantly.