I’ve been on my holistic wellness journey for 5 years in September and have done a lot of great things. I started eating better in 2011 and lost 50 pounds and have kept most of it off for the last 7 years.

I know all the benefits to Whole30. I’ve wanted to do it a thousand times. I’ve done a 2 week modified version (which was basically my half-hearted attempt at it so I could say I kind of gave it a try… but really meant I ate no processed food and made better choices). In truth, the true-blue full commitment of Whole30 has done nothing but intimidate me with all the the planning and prep it takes to pull it off.

But there is this threshold I’ve not been able to overcome in my health journey. I can’t kick my sugar habit completely. And though I gave up gluten completely over 4 years ago, and have researched my backside off to find all the good supplements to help with my digestive health, it’s still not where I want it to be. I mean, it’s leagues better, but I know it’s not as it should be. I still deal with eczema and lately it’s gotten as bad as it was before I started working on my gut (while I finally have clear skin on my face, it’s like I traded that for eczema on my elbows and feet, of all places).

And here lately, our youngest son has had some health concerns (like an 8 week long dry cough that no one can figure out the cause of, despite multiple doctor visits and treatments). And my husband, God love him, has some crummy eating habits when I’m not cooking him a meal — and I refuse to let him just claim his unrelenting exhaustion is “old age.” That’s a cop-out of the worst kind that I used to also give into and, since I feel better in my late 30s than I did in my late 20s, I know that’s not true.

So, we’ve finally taken the plunge. It took me an approximate total of 10 hours to plan our meals and shop (which I planned 2 weeks worth of food and am just repeating them because the two weeks alone was exhausting and overwhelming for my brain). Because I took it upon myself to try and come up with stuff that would keep us as close to our regular grocery budget as possible (Pinterest to the rescue!) and that took a lot of extra work. It took another 4 hours for me to do prep cooking the day before we started… just for the first week of meals. 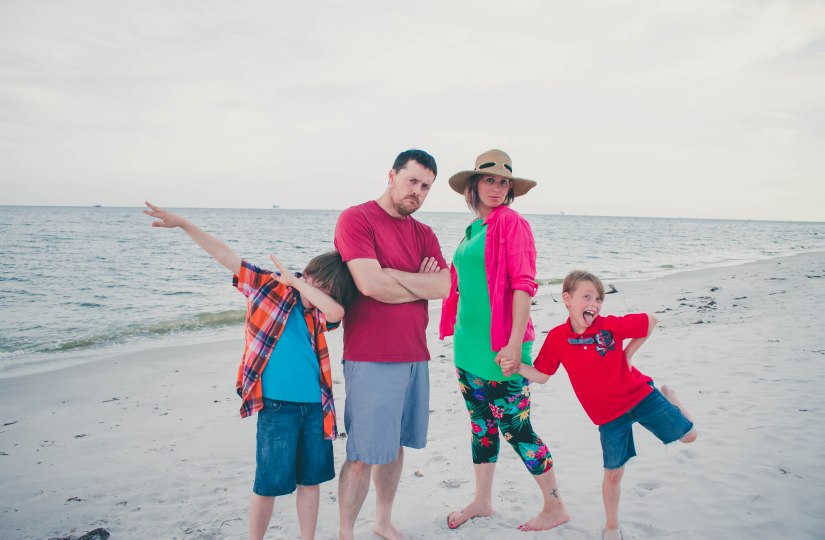 And I am cooking/preparing 3 meals a day as well as snacks (I know you’re not supposed to snack, but I have a house full of men who are bottomless pits and am hypoglycemic myself, so deal with my not-completely-perfect Whole30 adventure). The reason is, my crew (ahem… my husband) makes less-than-ideal choices when a meal isn’t already prepared because a) they don’t know how to cook and b) they want the easy button. By preparing everything for them in advance, I can be sure they stay on plan with me.

And I would fail if they didn’t do this with me. I need them to help me stay accountable. Keeping them on track keeps me on track.

So, over the next few weeks, I’ll be documenting our journey for the masses. Keeping it real.  I’ll share our meals, link to the ones I found on Pinterest and share my own recipes later.

So without further ado…

Was so stinking easy. For real. After all that prep the night before, it was very satisfying to partake in the outcome.

Dinner was kind of a wash. My oldest and I really liked it. My husband didn’t want seconds (a sure sign for him that it’s not his favorite) and my youngest took over an hour and still couldn’t finish it. We all “snacked” on plantain chips after dinner too.

At any rate, we all made it through well. My husband said he was offered tortilla chips at work and passed on them. For a man who is not at all thrilled by this adventure, I love how supportive he is. He has really been VERY appreciative of all the work I’m doing and recognizes it’s because I love them and want us all to be healthier.

Botched it on day two, folks. I had no idea that peas were off the menu. Missed that memo completely. Oh and peanuts too. My husband came home from work disappointed about that one. Whoops. They’re both legumes. Who knew? (Well, probably a lot of you, but we didn’t.)

My oldest had a headache, was a bit light-headed and even had vision problems a couple of times when he got up too fast today. He wouldn’t know to call it a hangover at just 10 years old, but that’s basically what it was.

For me too. Felt a little “floaty” and my blood sugar was fluctuating (hypoglycemia for a fun Whole30 adventure) most of the day. In fact, around 5pm, my blood sugar plummeted and I got super irritable and nothing seemed to fix it for a long time. Finally a handful of figs (if those are off limits too, I might punch someone….), walnuts and almonds helped. Then at karate, my oldest had a total meltdown because he couldn’t think straight or remember anything. Fun times.

And yes, we’re drinking lots of water. No worries there. THAT is not an issue for us. That’s the only thing we drink in our home. I drink about 100 ounces a days and my boys drink some at every meal. Though I did have my oldest drink extra today.

Dinner was great. It was really satisfying after a day when we constantly felt a little pang of hunger. The hubs came home from his 12 hour shift saying that he was hungrier than usual by the time his lunch break came around. But you know, he had a peanut date bar and felt better. (#facepalm — nice job, wifey) He was also grateful for dinner waiting, even if it was late (he gets off at 9pm, so he had to heat it up, but didn’t care much).

So yeah, peas for me and the kids, peanuts for the hubs. (((sigh))) We’re not starting over, though, we’re just carrying on. Because even if we had a couple of small hiccups, I made barbecue pork with freaking peaches, applesauce and tomato paste. So I still feel like I’m killing it, just a little.

I have a passion for helping others find abundance physically, emotionally, mentally and spiritually. A life lived full well is a life you #LiveAbundantly.